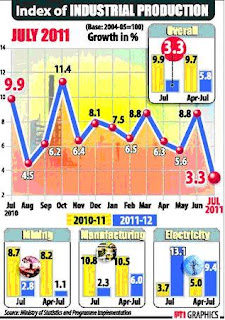 Such growth numbers are not unanticipated given the central banks 11 rate hikes since March 2010 in a yet to succeed effort at cooling inflationary pressures. The problem is that India’s growth reversal comes at a time when the global economic gloom unleashed by the sovereign debt crises in the European nations as well as policy deadlock in the US has taken on enormous proportions threatening another fallback of some developed economies into recessionary territory. Economic recovery appears to have come close to a halt in the major industrialised economies, with falling household and business confidence affecting both world trade and employment, while the risk of hitting patches of negative growth going forward has gone up, according to the OECD. The palpable negative fallout of the fresh global downturn is bound to be a fall in export revenues; as markets accounting for close to a third of India’s exports (the European Union and US together) are stagnating or falling back into recession. Demand from developing Asia (excluding China) and the OPEC countries which together account for another 40 per cent of India's exports are highly unlikely to remain unaffected by the downturn either. The fact that governments have fewer options to boost growth are driving both business and consumer confidence downward; this is also true for India as falling growth and taxes now leaves the government with much lesser room for expenditure to boost the economy and spearhead much needed infrastructure investment. The uncertainty in the business environment created by the repeated rate increases through the year has also affected hiring intentions of businesses. One cannot but feel that India has missed an opportunity to address several issues pertaining to infrastructural bottlenecks and inclusive growth, during the post-crisis revival years — such steps would have lent more credibility to the inflation fighting exercise as well as to India’s growth story.