Another Move towards Market-Linked Interest Rates...

A government panel, headed by RBI deputy governor Shyamala Gopinath, was set up to review the small investment schemes of post offices and banks. The panel has recommended — a 0.5% raise in the interest rate for post office savings account to 4% in line with the rate on savings bank deposits; raising the annual contribution limit in Public Provident Fund (PPF) to Rs.1,00,000, from the current Rs.70,000; discontinuation of the Kisan Vikas Patra; reduction in the maturity period of National Savings Certificates (NSCs) to five years from six, and introduction of a 10-year NSC scheme.

The proposed benchmarks and the administered (/current) rates for various instruments are given in the following tables (Table 1 and Table 2). 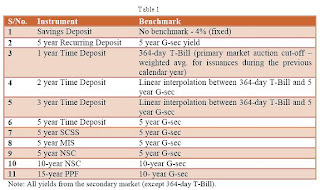 As for the usage of small savings funds the panel recommends that the mandatory component of investment of net small savings collections in state government securities be reduced to 50%. States can access up to 80% of NSSF for financing their annual expenditure. (The funds are given as a 25-year loan carrying 9.5% interest, higher than market rates. It has been proposed that the tenure of these loans may be reduced from the current 25 years, so states might be able to minimise their interest outgo and borrowing requirement by opting for 10-year loans at lower rates.) The balance amount could either be invested in central government securities or could be on-lent to other states on basis of requirement or could be lent for financing infrastructure projects requiring long-term finance, according to the panel. 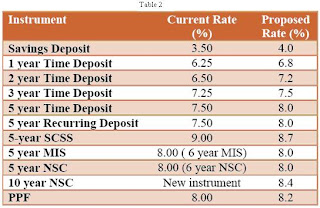 The share of small savings as a percentage of net financial savings of households increased sharply from 7.9 per cent in 1996-97 to 22.3 per cent in 2004-05. Thereafter, the share declined and even turned negative during 2007-08 and 2008-09 as the alternative savings instruments became relatively more attractive. The outstanding amount of collections under small savings stand at Rs. 7,93,447 Crore in 2010-11. The measures to reform the small savings plans offered by the government, if implemented, would help to ensure transparency, move towards market-linked rates and reduce the government’s fiscal burden.

Posted by Surge Research Support at 10:19 PM No comments: